I’ve taken around 300 photos while at the Church IT Roundtable [1] at COR, but I haven’t had time to sort them out and post a lot of the good ones. I did, however, upload fifteen of them (so far) to a new CITRT set on Flickr [2] that I took of the tables eating dinner courtesy to Dean Lisenby at ACS [3]. You can view the photos here [4]. It’s a good group of people! I got most (not all) of the attendees that were at the restaurant but even more showed up today. 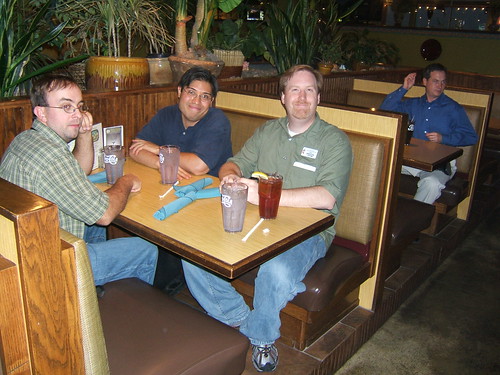 In this photo, the three guys around the table on the left (left-to-right) are Matt Bradshaw, a desktop support technician, and Brian Slezak, all from Church of the Resurrection [6]. These guys either develop for their website or have recently, and I got to chat with them at a techie level about website development (not design!). We talked about different backend CMS options (CMS in this case is Content Management Systems, not to be confused with CMS meaning Church Management System, which apparently has been around as that acronym for twenty years and isn’t officially changing to ChMS any time soon per some Roundtable discussion Wednesday afternoon!), and we also shared some stories about some vulnerabilities we’ve had exploited on our websites for various nefarious purposes in the past and how we discovered and dealt with them.

In our afternoon Roundtable session, we discussed spiritual issues surrounding Church IT departments, which I didn’t end up with many notes on. We moved on to Church Management Systems, which had some useful information but my few notes are not in an easily digestible format. In our room, three churches currently use Shelby [7], two use ACS Technologies [3], and we had one user each of Fellowship Technologies [8] and Microsoft CRM (which has been heavily customized). This provided some fodder for both theoretical and practical discussion about each system, but I think we were all about ready to wrap up after a long day of discussion and thus this was probably a little less informative than it could have been, but there were a few new gems of knowledge I gleaned. This is one area where I think the vendors in the room should probably have been allowed to participate rather than just observe, because we had vendor reps from Shelby, ACS, and Microsoft CRM (or an integrator of this one) in the room and the systems are sufficiently complex that they may have been able to provide additional information. Oh well, they are great folks to talk to outside of the Roundtable format and I think everyone is making great connections and relationships with the vendors and the attendees. 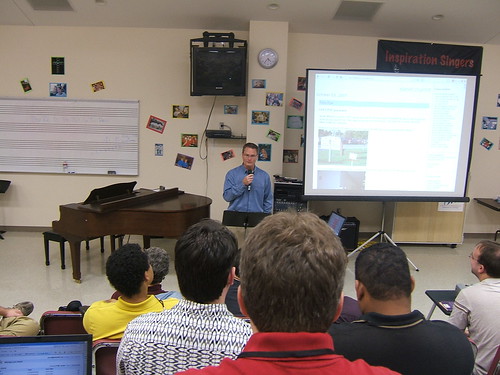 [9]We moved to the main meeting room after the afternoon Roundtable and got to hear for 30 minutes [9] from Rev. Adam Hamilton [10], COR’s Founding and Senior Pastor. It was very informative hearing from his point of view, and several people had some very well thought-out questions to ask him afterwards. Around his talk, we watched a leadership video and an awesome, hilarious movie about Facilities Managers (“FMers”) created by I believe the COR facilities manager. It was sooo stinking funny! About 90 laughs per minute! There was another similar video earlier today as well, just as funny. The best part is that everything in the videos about FMers applies just about equally to ITers, which I’m sure made it extra funny for all. We had a half-hour break after this and then it was time for a great dinner at 6:00 from a local BBQ joint catered to a room down the hall, sponsored but I don’t know which vendor paid this time.

7:00 brought a worship service and sermon from Clif’s [11] wife and the band from her church plant, which were excellent. At 8:00 they opened a room (until 11:00 pm at the latest) for hangout and open discussion, where I stuck around for 15-20 minutes and then caught a ride back to my hotel again from Dean Lisenby and Josh Wyse from ACS (thanks Dean!), where I am writing most of this post. 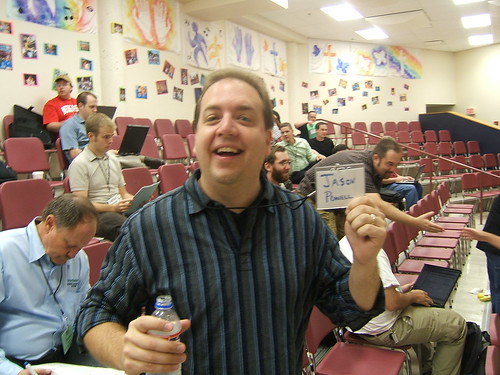 [12]Going back to this morning, I can’t forget to mention that Jason Powell [13] lost his Roundtable name badge and had to make a “fake” one for himself [12]. He was razzed first thing this morning, and he was kind (apparently I said “king” rather than “kind” when writing this post late last night, so let me clarify: JP is cool, but not king :-) enough to post for a photo just so I could blog about it!

In other news, back on the home front I ran into an issue back at Lakeview today: I let the SSL certificate expire for our OWA webmail (which also is used for RPC over HTTPS in Outlook, and by our Treos with ActiveSync). So I spent part of the afternoon Roundtable remotely accessing the Lakeview network and working to resolvethat situation. Technically, the certificate didn’t expire, the renewed certificate was just never updated on the servers. This was for a variety of reasons, the main ones being that it fell off my priorities list with everything else going on, and also I didn’t have the username/password information handy for that account and didn’t find the time to track it all down with all the steps that will likely require. I have a temporary solution halfway in place now (everything but some Treos are working again) that I have to tweak tonight before I go to bed (also known as right now), and it should give me the time to deal with the original problem in the next few weeks. I won’t get into the details for both security reasons and because I’ve spent enough time recapping today already!

3 Comments To "Church IT Roundtable Pre-Dinner, Wednesday Recap, and More!"

This is a little tangential, but do you know David Drinnon at Second Baptist Church? He just posted a great item on his experiences replacing his ChMS (with Advanced Solutions International’s iMIS). Thought you might like to read it: [14]

[…] was going to check out the the ‘king of Church IT’ Jason Powell’s blog, but couldn’t recall the url.. shame on me.. so a quick google gave […]

Joanna: Thanks for the link, that is a very interesting post! I will definitely use it as a reference when we get to the same position, although we are a much smaller church (I hope that means it will be easier!). Good stuff. And I haven’t seen iMIS before, I’ll have to take a look. We lack internal programming staff however, so a custom solution is probably not in our near-term future.